For an hour Saturday morning along Bayou Teche in Arnaudville, the only sounds came from buzzing insects, calling birds and hundreds of people murmuring the prayers of the rosary.

Without the drone of a nearby air conditioner (check out our hvac services from this site to maintain them properly), it might have sounded just that way 250 years before, when French-speaking Catholics the British expelled from Canada arrived to make new homes along its banks.

As stated in this resource, the combination of history and religion made its way down the bayou during what many in attendance called the event of a lifetime, the Fete-Dieu du Teche. Dozens of party boats, cruisers and fishing vessels formed a procession that started early in the day with stops in Leonville, Arnaudville, Cecilia, Breaux Bridge and St. Martinville.

Leading the procession was a specially outfitted motorboat with a canopy that sheltered a tall gold monstrance – an ornamental container in which Catholics display the consecrated communion wafer they believe is the body of Christ. 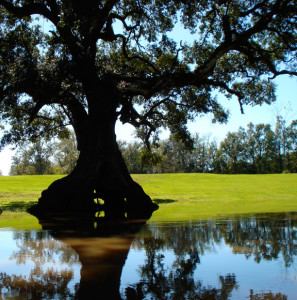 “This is the 250th anniversary of the evangelization of the Teche,” said Rev. Keenan Brown, pastor of St. Francis Regis Catholic Church in Arnaudville.

Saturday, Aug. 15 also happened to be the feast of the Assumption, the day on which Catholics believe God assumed Mary, the mother of Jesus, bodily into heaven.

“Whether we are Cajun or Creole, she’s our mother,” Brown said.

Hundreds of people — some of whom planned to follow the entire procession route on land — crowded onto the bayou bank behind the church for the rosary and benediction.

Just as the flotilla of 50 or so boats became visible, the smoky aroma of incense drifted down the bank.

Some craft bore families, representatives of individual churches including St. Peter in Grand Prairie, St. Anthony in Krotz Springs and Sacred Heart in Port Barre. At least two boats from the St. Landry Parish Sheriff’s Department were in the mix. Others carried seminarians, priests and nuns in full habit from throughout the Roman Catholic Diocese of Lafayette.

As they approached the welcome shade of spreading live oaks, the old devotional songs from the people aboard the boats blended with singing on the bank.

Those on the boats disembarked. Many on land made the sign of the cross. After girls in white communion dresses scattered rose petals in his path, Rev. Michael Champagne hoisted the monstrance pole and carried it toward a temporary altar.

All present recited the rosary, alternating between English and French. Quite a few knelt on the rough ground, even though folding chairs waited nearby.

For Marty Berry the opportunity for this public expression of faith was too good to miss.

She was excited “to do it as part of a community, as part of our Catholic family — which is what brought the Cajuns here to begin with.”

Berry set out at 6 a.m. from her home in Lake Charles, in part to see Rev. Glen John Provost, bishop of that Catholic diocese, celebrate the first Mass of the procession in Leonville.

“This morning I saw the sunrise,” she said. “There’s just so much beauty here, not just in the land but in the hearts of the people.”

The crowd included people in Catholic-themed T-shirts and casual shorts, lace chapel veils and long skirts. A half dozen Knights of Columbus, members of a Catholic fraternal organization, stood guard in their formal black suits and capes, plumed caps and ceremonial swords.

In one hand she held a crucifix that depicted a bloodied Christ — “I’ve been carrying mine for 10 years,” she proclaimed — and a rosary in the other. As she spoke about the spectacle before her, Celestine’s face glowed.

“This is something I’ll never see again. It’s gorgeous. Gives me chills,” she said.

“On our Bayou Teche.”

Shake Your Trail Feather: Oct. 22, 2022, at Parc Des Ponts in Breaux Bridge. Register for the paddle from Poche's Country Club to either Parc Des Ponts or Lil's on the Teche via Eventbrite. Music by Horace Trahan and the Ossun Express!